The True Cost of AWS WorkSpaces in 2022 The emergence of Desktop-as-a-Service (DaaS) platforms such as Amazon Workspaces has proven highly beneficial in cost reduction. Especially for SMBs, such platforms help in scaling the business more efficiently, as companies only pay for infrastructure as much as is required at any given moment.

However, choosing the ‘pay-as-you-go’ model with Amazon Workspaces can sometimes prove to be counterintuitive, as the charges based on your usage can add up to be a hefty sum. This is because when you ‘pay as you go’, the cost based on usage can cross your planned budget.

Here, we’ll cover in detail how the Amazon Workspaces cost adds up, along with presenting certain alternatives that you can consider to control these costs and stay within your planned budget.

The pricing for Amazon Workspaces is based on the Pay-as-you-Go model, where you pay according to your infrastructure requirements. Users can pay based on monthly usage, hourly usage, or even seconds. Getting priced based on hours/seconds is ideal for users that need to access their virtual desktops only for a limited period per day.

The Amazon Workspaces cost varies depending on whether you need a virtual Windows or Linux system, required root and individual user volume, preferred region/zone, etc. The rates for each kind of specification are listed on the official AWS website. Amazon also provides a pricing calculator where users can specify such requirements to estimate the Amazon Workspaces cost involved. 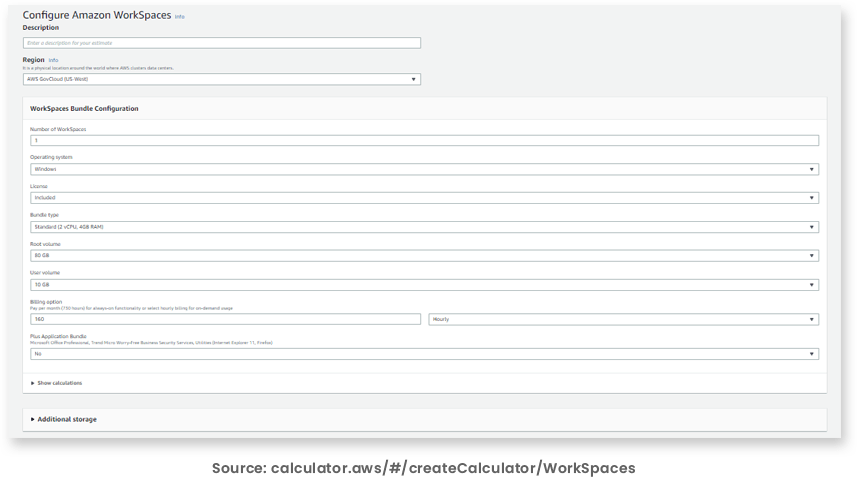 1- The Curious Case of Forgotten Instances
One particular Amazon Workspaces cost that often adds up is the cost of running instances (virtual servers) that users usually forget about. In many cases, a user is running several instances on a particular Amazon service, which is charged to the user based on the amount of consumption per hour/second.

For example, say you’re running Amazon Sagemaker, (a cloud-based machine learning platform to train and deploy machine learning models) and you forget about an instance that has been running in the background for several hours. By the time you remember to shut it down, you realize you’ve been charged several hundred dollars for using that instance.

While, of course, some might label this as human error. But, it doesn’t change the fact that you unnecessarily have to pay extra and that there should be some mechanism in place to shut down the instance in case it remains idle for a certain period.

Currently, Amazon does not provide any method to set a limit after which the instance can automatically shut down. This leaves a blind spot in the system that the user needs to control the total Amazon Workspaces cost. (Note that while third-party services can act as an extension to solve this issue, it is not present by default in the Sagemaker dashboard).

2- The Cost of Training
Many businesses that opt for Amazon Workspaces don’t consider the cost of training employees to integrate the system with their work environment properly. Businesses are left with hiring outside consultants or even full-time employees to help deploy the service as it has already been paid for.

As a result, the Amazon Workspaces cost that the business realistically ends up paying for is more than what is initially anticipated. This is why the cost of learning the service within your organization is often overlooked, it can add up to an unanticipated cost.

3- Factoring in Scale-Down Charges
One major factor attracting businesses to opt for Desktop-as-a-Service (DaaS) solutions such as Amazon workspaces is upward scalability. This means that as requirements grow, businesses can increase costs only as required. However, one major factor that isn’t priced into the anticipated Amazon Workspaces cost is a situation where scaling down might be necessary.

Especially where small deployments of less than 250 users are concerned, businesses often end up needlessly paying extra. Because the company has paid certain upfront costs such as one-time installation charges, scaling down can add to the overall cost.

4- Lack of Automatic Shutdown
While Amazon does provide bill alarms to notify the user if a certain threshold is crossed, that can cause the bill to exceed your expected cost. However, it’s realistically not enough.

This is because specific processes such as Scriptmode training run in the background without the user realizing it, resulting in an exceeded cost that the user has to pay despite bill alarms within the Amazon workspaces.

Because you cannot set a ‘stop-limit’ to control the amount of money that Amazon can charge you, the Amazon Workspaces cost can exceed expectations. Not only that, but bill alarms can take up to 12 hours to update after you set them, leaving another issue for added costs that you will needlessly be exposed to in the meantime.

5- EC2 Quotas
If you wish to increase your EC2 quota ((which is a limit you can specify for the number of resources you’ll be using) for instances such as P-type (P2, P3) instances, then Amazon asks you to increase your quota for all types of instances rather than any specific one.

For example, your business can meet its requirement by using P2 instances. But you’ll be needlessly paying for P3 instances that are required only in cases where high computational power is needed, i.e., AI and machine learning.

Not only that, but Amazon Workspaces is currently lagging in trying to meet demand. This is evident from the amount of time required to get an EC2 quota approved by the Amazon sales team. Users have reported waiting for several weeks to get a quota approved in EC2, adding to business costs if loss of time is taken into consideration.

Looking at Alternatives and How to Avoid these Costs

Despite such hurdles that can add to your Amazon Workspace cost, certain alternative DaaS solutions are present in the market. Here, we’ll look at the three significant alternatives and discuss in detail whether any of them help solve the issue of unanticipated costs. 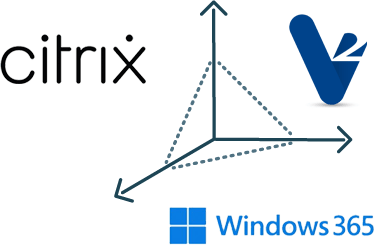 1- Citrix
Citrix provides its Desktop-as-a-Service (DaaS) solution that can be used by businesses to cut out the need for physical in-house hardware infrastructure. Citrix enables users to do this through XenDesktop and XenApp. While XenDesktop enables you to create virtual desktops, XenApp is primarily used to access applications/software remotely.

In terms of the costs involved, Amazon Workspace generally outperforms Citrix. This is because while Amazon workspace allows you to use its services starting with only one user, Citrix requires you to pay for at least 25 users to get started. 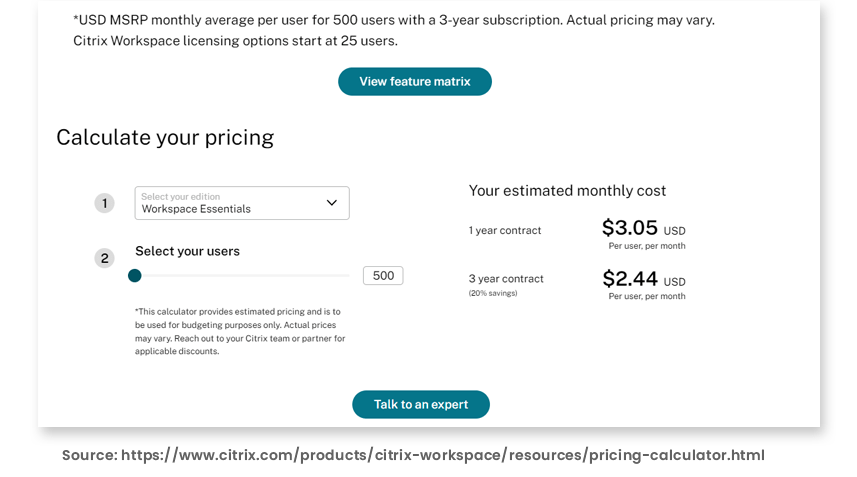 Not only that, but Citrix asks you to pay for at least one month upfront, while users can start using Amazon Workspace by getting billed by hour/second. The fixed pricing model for Citrix versus the ‘Pay-as-you-Go’ model for Amazon represents a fundamental difference in helping businesses scale more efficiently.

Citrix also limits users to only access Windows machines, while Amazon Workspace also provides accessibility to Linux Machines. This lowers the barrier for entry where Amazon Workspace cost is concerned. At the same time, businesses will have to consider a lot of extra fees and specifications if they wish to use Citrix’s DaaS solution.

2- V2 Cloud
V2 Cloud is a DaaS solution that helps businesses move their IT infrastructure to a cloud platform without the need for physical deployment, in the same vein as Amazon workspace. V2 provides similar DaaS solutions to the Amazon workspace in terms of functionality.

Let’s look at the pricing for V2 cloud and compare the hidden Amazon Workspace costs that we highlighted above. Unlike Amazon workspace, V2 has no hidden fees, and bundles all costs in one package. 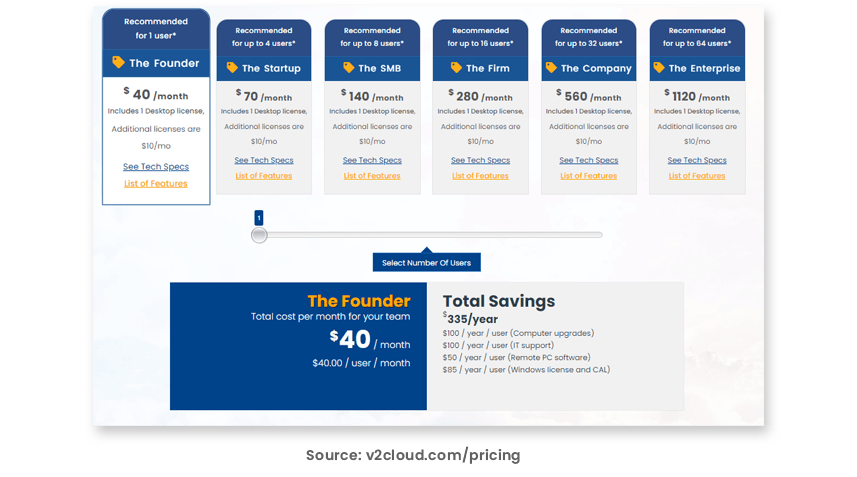 As we saw above, with the lack of control involved with Amazon Workspace that can cause you to be charged extra based on hourly usage without realizing it, V2 Cloud provides the necessary controls required to avoid overbilling.

If we compare costs such as the usual Amazon Workspace cost involved with training staff on how to use the platform, V2 Cloud prices such costs by providing free and highly valuable technical support to train your staff in this regard. V2 also extensively cuts down initial setup charges, making it easier to scale down if required.

Not only that, most unanticipated charges with Amazon Workspace cost happen midway as users realize that they will need additional plugins to execute specific functions. If we take into consideration all of these factors, then perhaps V2 Cloud can act as a viable alternative to factor in the unanticipated Amazon Workspace costs that businesses typically might have to deal with.

Windows 365, although an alternative to Amazon Workspace, aims to target a different kind of user-base. Windows 365 aims to simplify many virtual desktop processes by design, such as removing the detailed configuration. On the other hand, Amazon Workspace allows the end-user clear configuration options, allowing users greater functionality control.

While it might not be clear on the surface, herein lies the issue with Windows 365 in terms of cost. Because the user is intentionally given access to limited functionality and configuration options, most businesses often require greater control of their work environment as they scale up.

But because Windows 365 is intentionally limited in terms of allowing configuration, most businesses often face added costs to optimize their work environment according to what is required at that moment in time.

This means that if you’re looking for an alternative to Amazon Workspace, sacrificing configuration capability for simplicity to reduce costs might still end up costing you the same, if not more. As such, while the unanticipated Amazon Workspace costs remain, Windows 365 might not be a viable alternative to solve this issue.

So What Could Be a Better Alternative?

Well, if you’ve read everything so far, then you already know that V2 Cloud stands out as the most viable Amazon Workspace alternative. Where Amazon Workspace cost is involved, you’re exposed to several hidden charges that build up after integrating the cloud service with your work environment. This could be through charges that build up if you leave an instance running in the background for several hours, which you’re unable to set an automatic stop for.

Or, it could be added costs faced when trying to scale down due to small initial deployments.

V2 Cloud, when compared with the other alternatives, solves most of these issues by pricing in all of these costs at the start. Not only that, the costs remain low at the beginning, especially making it a viable choice for small businesses looking to scale. It also makes sure there are no unanticipated charges that overrun the budget later. In the end, the cost will play a primary role in making your overall IT strategy effective. You can read up further to understand how an effective IT strategy comes together, and what factors are involved in developing it.