10 Actions to Secure Your RDP from MitM Attacks 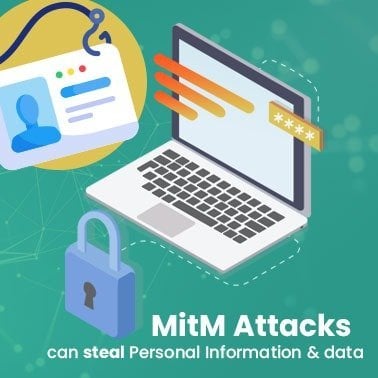 First of all, Remote Desktop Protocol (RDP) is a network communications protocol developed by Microsoft mainly for remote access. The management of remote servers, virtual desktops, terminal servers, and applications is also done through a remote desktop protocol. RDP sessions run via an encrypted channel. Overall, it prevents outsiders from viewing the encrypted sessions by secretly monitoring the network or changing the traffic (site) between the victim and the attacker.

When these sessions are being monitored, we called it a Man-in-the-middle (MitM), which is a well-documented method of gaining unauthorized access to any RDP session. To emphasize. their goal is to steal your login credentials or personal information. They can also spy and steal your data. Ultimately, these attacks can be costly and complicated for a company. In 2021, ransomware cost 20 billion to businesses. This is why you should have a secure RDP against attacks is very important, especially when all your workers are remote, using their personal devices and networks.

Unfortunately, MitM are not the only attacks on the internet. There are other types of attacks that can happen either on your browser, software, email, etc. To demonstrate, here’s a list of common attack used to hijack a RDP session:

How secure is RDP?

RDP is enabling you to connect to a remote desktop, but how secure is it?  There are two big vulnerabilities to know:

By itself, RDP is not a secure setup and might put your organization vulnerable to cyberattacks. However, if you’re combining it with password management, SSO, and firewall rules, you can address those vulnerabilities easily. If you’re using RDP alone, make sure you’re protected from these vulnerabilities.

An alternative is to use a solution built around RDP to minimize risks by adding layers of security on top of it. This is how we built V2 Cloud and you will find more information about our product at the end of this article.

To clarify, Microsoft has a huge role, and obligation, to constantly fix the vulnerabilities being disclosed. However, it’s fundamental that admins and security consultants take proactive measures to prevent and reduce the security risks posed by the remote desktop protocol (RDP) on their system.

Some proactive measures can be implemented immediately, not to stop an attack, but to overcome an attacker’s likelihood of wreaking havoc on your network if they gain access to a machine anywhere along the chain.

Before we get to the preventive measure, let’s talk a little about the most recent Credential Security Support Provider protocol (CredSSP) vulnerability. According to Microsoft, CredSSP is a protocol that enables an application to securely pass on a user’s credentials from a client to a target server.

It was used by a Remote Desktop Protocol to secure a transfer of credentials to a target server. It was discovered by Preempt researchers. Although it’s been patched by Microsoft in the March Patch (CVE-2018–0886), this tells you how vulnerable a network using the RDP can be if no preventive measures are put in place to secure your remote desktop sessions.

This vulnerability could have been leveraged by attackers using the man-in-the-middle method to take over machines on a network. At V2 Cloud, we specialize in Ransomware Data Recovery, to prevent these types of attacks.

10 Steps to Secure your RDP

Here’s an effective list to ensure your RDP sessions are secure. We recommend following these 10 protective measures:

With this in mind, following the recommendations on the checklist to secure your RDP connection doesn’t guarantee that your system will be 100% protected from attacks, although it does make it a lot harder to be a victim of attackers. Although, these protective measures can be challenging to implement for someone who isn’t tech-savvy.

This is why V2 Cloud is an incredible resource. Every V2 Cloud customer is protected from the CredSSP kind of attack because the secure Remote Desktop Protocol sessions are tunneled into SSH protocol using the V2 Cloud Client. This SSH tunnel protects all your data transfer and keystrokes that you operate inside your remote desktop. Also, there is no need to open the TCP Port 3389 of your virtual machine.

On the positive side, is that you don’t have to start the implementation of secure RDP measures from scratch. V2 Cloud’s forward-thinking cloud and our team of experts have developed a secure RDP connection, and it is straightforward to integrate into your already existing cloud infrastructure
The best way to connect to V2 Cloud is with our remote desktop solution, it’s even more secure, and we can provide better features.

Use our expertise to your advantage!

When she’s not working as a Growth Marketer for V2 Cloud, Frederik likes to relax by spending time with friends and family. She has spent a lot of time travelling to other countries and she’s always keen for a new adventure.

A curated newsletter about the world of IT, tech and cloud computing

we promise we don’t spam