What Is VDI Desktop, How Does It Work and the Top Benefits Explained

The world has become highly reliant on technology for innovation and productivity. For instance, more workers in different fields and industries are finding themselves employing desktop, laptop, tablets and/or smartphones to accomplish most of their tasks. Often from remote locations or on the go.

However, providing each worker with a dedicated high-performing computing system can be extremely costly and sophisticated to manage. The solution is to provide a VDI as an alternative. It’s easier to manage remotely, secure, affordable, and easier to protect from disasters.
So, what is a VDI desktop, and how does it consolidate both hardware and software into a single computing system for greater efficiency?

However, application manageability and compatibility issues remained major concerns to deal with. Thus, application virtualization was introduced as the ultimate solution to prevent all these problems. With this technology, a software application runs on the end user’s system similar to a locally installed application. However, the app uses a sandbox environment in the background which removes the need to install the application to the local OS.

What is VDI Desktop?

A VDI stands for Virtual Desktop Infrastructure. In principle, VDI technology deploys virtual machines for end-users and creates layers of security within a network to enable remote access to virtualized desktops.

In practice, with a VDI model, virtualized desktop (VD) instances are created in a data center. Subsequently, users can then access their VDs mostly via a dedicated network of the deploying entity, either on-premise or via a Virtual Private Network (VPN).

All things considered, VDI is essentially a technology that enables businesses to enable work from anywhere and anytime on desktops, laptops, and mobiles. Overall, the core purpose behind a VDI deployment is to maintain complete control over organizational data–either in cases where the data is highly sensitive– or the regulations in place don’t permit data to be kept in the public cloud. 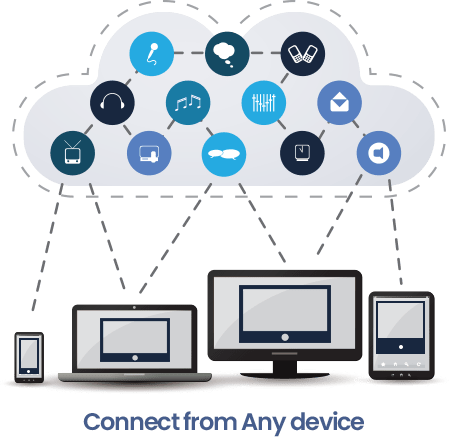 How Does a Virtual Desktop Infrastructure Work?

VDIs are composed of three key components. Firstly, a virtualization platform constituting computing hardware and a hypervisor. Secondly, a connection broker that connects users to virtual desktops. Lastly, a profile management solution to allow users to have their unique data persists in a virtual desktop environment.

Generally, the hypervisor segments servers into virtual machines, which users access remotely from their chosen devices, with all processing done on the host server. Subsequently, users can then connect to their desktop instances via a connection broker, which is a software-based gateway that serves as an intermediary between the user and the server.

Principally, a VDI can be either persistent or non-persistent:

With a persistent VDI, a user connects to the same desktop each time. However, users can personalize the desktop for their exact needs since changes are saved even after the connection is reset. This means a desktop in a persistent VDI environment acts exactly like a personal physical desktop, set according to a user’s needs.

With a non-persistent VDI, users essentially connect to generic (universal) desktops, with no changes saved. This option is typically simpler and cheaper, since there isn’t a need to maintain customized desktops between sessions. Generally, non-persistent VDI is often deployed in organizations with multiple task workers. Or even employees who execute a limited set of repetitive tasks and do not need a customized desktop.

Here are a few vital pointers to remember when discussing what a VDI desktop is:

The top benefits of using a VDI are the following ones:

With VDI, everything is managed in one central location. This means that whenever new versions of applications come out, they can be easily added to a central desktop image instead of being installed, maintained, and troubleshot — on thousands, or tens of thousands of end-user devices. Furthermore, it enables you can fix problems by remote access from the central station.

With VDI, admins can easily initiate updates, installations, and troubleshooting procedures without the user’s input.

with VDI, new users can be added or blocked with a click of the mouse. This means that IT departments can control who is exactly utilizing specific applications, or even control application versions, especially if end-users aren’t given permission to install software on their own devices.

VDI allows users to work from anywhere and from any compatible device.

The VDI centralized architecture makes it perfect for quickly deploying virtualized applications and desktops to multiple devices. Essentially, IT admins just need to set up the virtualized apps and desktops in one place, then have them accessed via end-user devices over a local area network, or the internet. This significantly eliminates application compatibility issues during upgrades while cutting down application/desktop deployment time and maintenance.

VDI’s centralized architecture makes it inherently secure. This is simply because apps, desktops, and data are all stored in a central location than on the devices themselves. As such, digital assets aren’t easily compromised if ever a device gets lost or stolen. Furthermore, it’s much easier to apply security patches and policies.

What Is the Simplest VDI Desktop

All things considered, VDI solutions have several advantages for any deploying entity. The main standout point is that all the organizational data is reconciled at a single location, which, in turn, makes its management and security a more manageable affair.

VDIs can be updated, patched, configured, and secured at a single location. Thus reducing the administrative hassle of repeating the same processes for each endpoint device.

For organizations seeking to implement VDI, V2 Cloud’s virtualization platform offers efficiency, ease of use, and scalability that eliminate the sophistications from VDI. Whether an organization decides to employ VDI, remote desktop sessions, or app delivery solutions, V2 Cloud supports all these technologies to deliver robust connection broker and profile management solutions that meet the needs of all of their users while focusing on simplicity and cost-saving.
Want to employ our sophisticated and cost-efficient virtualization solution? Book a live demo instantly here!

Denis is a Professional Computer Engineer, Technical Writer, and Software Product Manager. With over six years of experience, he is exorbitantly passionate about helping businesses create software products and succeed with technology by simplifying complex tech topics.
x