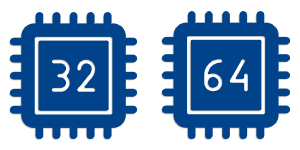 A 64-bit processor or a central processing unit (CPU) is known to be faster than a 32 bit CPU.

In a computer system for data or programs to be run, they need to be first loaded into the computer memory or the random access memory (RAM) from the hard drive. Once the program or data is loaded to the RAM, the CPU accesses data or runs the program.

As a 32-bit processor can address only 4 gigabytes of memory, the CPU will not have the capacity to handle larger applications that require more than 4 gigabytes of memory such as video rendering applications, image editing tools, and video games. When this happens, instead of accessing data directly from the RAM, the CPU has to perform extra work to bring the excess data from the hard drive to the RAM to access them. This slows down the performance of the computer system.