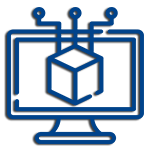 Application streaming is an online software delivery platform. It basically works based on a fact that only a small portion of the programming code of most applications is required to run a program. The process is transparent to the end-user as well. The need to completely install an application on a client machine is not necessary. Portions of the application can be acquired via the network whenever required.

The server of the application transfers enough data to launch the application; this is usually only 10% of the application. Then the server streams the rest of the information to the client in the background even when the end-user is working. Application streaming uses RTSP (Real-Time Streaming Protocol) to perform the tasks. It is generally used in desktop virtualization.

Some of the benefits that can be gained are discussed as follows,