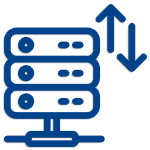 The bandwidth definition is referred to as the maximum rate of data that can be transmitted through a network per unit time. Bandwidth is measured by bits per second or megabits per second (Mbps). The higher the bandwidth, the more data can be transmitted through the network within a given amount of time, and the faster the data reaches its destination.

The types of bandwidth

There are 2 types of bandwidth based on the electromagnetic band inside the bandwidth.