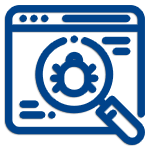 A bug computer definition is referred to as a failure or a flaw in the software program. A Bug produces an incorrect or undesired result that deviates from the expected result or behavior. Let’s say there is a calculator app that displays the sum of two numbers. When you add two numbers using this app and if it shows you a wrong total, then we can say this app has a bug.

Every software application goes through several testing cycles before they are released to the end-users. The testing teams test the application using a set of test cases written based on the requirements. While executing these test cases if the testers find any unexpected result, they mark it as a bug and report to the developers to get it fixed.

Every software bug has a life cycle. The moment a bug is discovered, it is in the “new” state. When it is reported to a developer, the state becomes “assigned”. While the developer works on fixing the bug, it is in the “open” state. If the issue is fixed, it is marked as “fixed”. The testers test the application again to check if the issue persists. During this time the bug is in the “test” state. If the issue no longer persists, the tester marks it as “verified” and then “closed” once it is confirmed. If the issue persists the bug is moved to the “re-opened” state.

What causes bugs in software?

A flaw or failure in a software program could occur due to the following reasons.