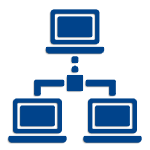 Computer network definition is connecting two or more computers to exchange information and share hardware resources such as printers and file servers with each other. The largest computer network is the Internet which connects millions of computers across the world.

What are the types of computer networks?

Now that you know the computer network definition, let’s learn about the different kinds. The networks can be categorized into the following types based on the area they cover geographically.

Local Area Network (LAN) is a network formed connecting a group of devices that are in close proximity to each other such as computers, servers, and printers using network devices such as switches and hubs. A LAN spans over a single building such as a university lab or an office building.

Metropolitan Area Network (MAN) is a network that spans several buildings in a city or town. MANs are typically connected using high-speed connections such as fiber optics cables.

Wide Area Networks (WAN) is the largest type of network. A WAN may include multiple MANs and LANs. It is a network that spans over a large geographical area such as a country, a continent or even the entire globe. The Internet is a good example of a WAN.