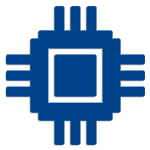 What does the CPU do?

Now that you know the CPU definition, let’s learn what is do. It consists of three main components: The first is the arithmetic logic unit (ALU) which performs arithmetic and logical operations. Second is the control unit (CU) which performs the fetch-decode-execute cycle for every program instruction. The third is a set of registers that provide the immediate memory to store instructions and memory locations during CU and ALU operations.

When a program is loaded into the random access memory (RAM), it is saved as individual instructions. Every instruction consists of two parts. The first part is the instruction such as LOAD, ADD, STORE and JUMP. The second part is the memory address of the data on which the particular instruction is to be performed. The CU fetches the instruction from a memory address, decodes and executes it. The CU utilizes the three registers, program counter, instruction register and accumulator to hold the instructions and memory locations during each fetch-decode-execute cycle. The CU then sends the signals to the ALU to perform the required operations.