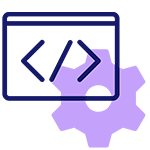 The definition of firmware say that it’s a special type of software program that controls, monitors and manages hardware operations of a device. It is embedded in personal computers, consumer appliances, automobiles, and mobile phones. Firmware is written in a low-level language that can be easily understood by hardware. Unlike software applications, the firmware is directly associated with the hardware of a device and is responsible for operating on the hardware.

In computer systems and most consumer appliances, the firmware is stored inside non-volatile memory. Non-volatile memory retains the state when power is turned off similar to random access memory (RAM), erasable programmable read-only memory (EPROM), and flash memory. This enables resuming tasks from where they stopped in case of a power failure. In some devices, the firmware is permanently installed during manufacturing and cannot be changed during the lifetime of the device.

Firmware in electronic devices is not updatable and they are called internal firmware. In such cases, updating needs physical modification to the device which is not a common practice. Every mobile phone has firmware that can be updated depending on the make and the model. Firmware updates are usually available in modern intelligent vehicles. Updates are done to fix bugs, introduce new features or upgrade functionality.

A very popular example of Firmware is the program that helps you operate a washing machine. When you turn it on and input the desired combination of washing options, the firmware sends signals to hardware and gives you the expected output. So does a TV remote. Consider how your microwave oven works to heat food in a given time. All these functionalities are handled by the firmware installed inside these appliances.