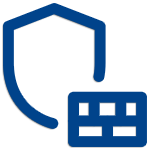 The firewall definition is a network security component that is designed to safeguard computer networks from unauthorized access. The purpose of implementing this safeguard in a computer network is to create a safety barrier between the private network and the public Internet.

A firewall blocks unauthorized access and unwanted Internet traffic by filtering the information that comes through the Internet and permitting only the desired traffic into the private network. It protects your network from hackers & malicious traffic that may try to penetrate your private network to cause harm such as spreading computer viruses and stealing your data.

How does a Firewall work?

Now that you know the firewall definition, let’s see how it works. It starts by filtering the incoming and outgoing network data based on a predefined set of rules which is called an access control list.

When there is incoming traffic, the firewall looks upon the access control list and checks if the port number or the IP address of the source is allowed to access the network.

Based on the given rules, the firewall either grants permission to pass through the firewall or denies access to the network.