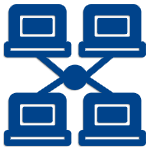 First, the LAN definition stands for Local Area Network. It connects computers to form a computer’s network in a relatively small geographical area such as a university computer lab or an office building. In a local area network, several computers are connected using network devices such as hubs, bridges, switches, and routers.

When a LAN is established in an area, it is set up according to a special physical arrangement which is called network topology. Generally, the most used network topologies for LANs are bus, ring, star, and tree. An interconnected set of LANs forms an extended network which is referred to as a wide area network (WAN).

The advantages of using a LAN