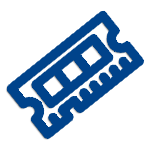 The RAM computer definition stands for Random Access Memory which is also called computer memory. RAM is one of the main components of a computer system. RAM is physically stored in modules on the motherboard of your computer. These modules are called dual inline memory modules (DIMMs). DIMMs come in different memory sizes ranging from 8 MB to 1 GB. RAM requires constant electrical power to store data. If the power is turned off, the data will be lost.

What does RAM do?

If the RAM capacity is too small the computer memory might not be sufficient to keep all the data that the CPU requires to run programs. Then the computer system will keep the rest of the data in the hard drive to compensate for the low memory. Now, instead of passing data from RAM to the CPU, the computer system has to do extra work to go back to the hard drive and bring data to the CPU through the RAM. This slows down the performance of your computer and to avoid this you have to increase the amount of RAM on your computer. That is why computers with more RAM can perform faster. You now know the RAM computer definition. You can also reduce your memory usage of your cloud computer by following this simple tutorial