What is a Windows Server? 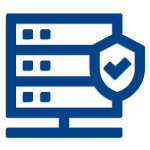 The Operating System of those server is designed to handle web hosting and corporate networks more efficiently. It contains enterprise server software that allows the users to manage and share services among multiple computers. By utilizing Windows Server, the users obtain the ability to more efficiently administer applications, data, storage, security, users and hardware within a computer network.

When do you use Windows Server?

Now that you know what is a Windows Server, when do you use it? Here are some of the use cases.

Did you know that V2 Cloud provides hosting on Windows Cloud Server? You can easily store data in the cloud infrastructure you deserve.