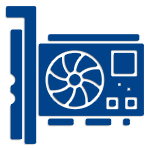 GPU stands for Graphics Processing Unit. It is a circuit designed to use in computer systems to process instructions related to a specific purpose such as creation and modification of graphical contents. The GPUs are commonly used for applications that create images, render videos and perform high-end graphics games.

The GPU consists of multiple cores or separate processing units to handle parallel processing. Hence, having a GPU in your computer system helps you to increase performance. Conventionally GPUs were installed to computer systems as external units. Now the motherboards are available with GPUs integrated to them. Microsoft intel HD graphics card is an example of an inbuilt GPU.

What does the GPU do?

The GPU consists of multiple memory controllers. Each memory controller has a graphic processing cluster (GPC) which is bound to them. Each GPC has multiple streaming multiprocessors inside of it. Inside a single streaming multiprocessor, there are hundreds of cores that process instructions of a computer program. These multiple cores support the parallel processing of intense computations. During parallel processing, a single piece of instruction is executed at a time on many different processing units and then combine them all at the end.