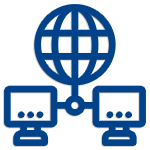 What is TCP? It stands for transmission control protocol and it is one of the main protocols used in the TCP/IP network. The transmission control protocol is responsible for establishing reliable communication between two computers in a network and ensures that the data is received correctly in the right order. TCP is also responsible for delivering data. If a data packet is not received by the receiver computer, it will resends the data packet to the receiver computer.

Without TCP, the data transmitted between two computers in a network may be missing data or will receive data in out of order. For example, if you do not use this protocol, you will load a web page with missing images, backward or out of order texts. Also, when you download a file, you might not receive the entire file, instead, you could get error messages such as “error in file downloading” or “incomplete download” etc.

Now that you know what is TCP, here’s a couple of interesting details about it. By being a connection-oriented protocol, it will first acknowledge a session between two computers that are trying to communicate with each other. Before any communication takes place, the two computers first verify and establish a connection between them using a mechanism called a 3-way handshake.