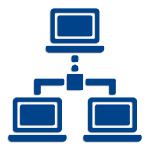 Virtualization refers to the creation of virtual computers to efficiently share computation power and hardware resources by creating a virtualization layer between the hardware components and the user.