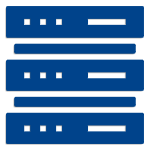 As multiple virtual servers can reside in one machine it is a very popular way of providing low-cost web hosting services. In most cases, performance is not affected and each website behaves as if it is being served by a dedicated server. However, if too many of them reside on the same computer, or if one virtual server starts hogging resources, Web pages will be delivered more slowly.

The advantages of server virtualization

Now that you know the virtual server definition, here are some advantages of using them.